Certified to Run for Years to Come and for GHG Regulations 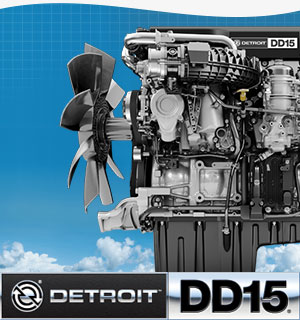 If you remember, EPA ’07 and ’10 regulations targeted diesel engine emissions specifically. It looks like it’s working, as you don’t see the black smoke coming out of diesel engine exhaust pipes anymore. Now they’re extending the regulations to include the entire truck. This year, Detroit™ engines certified early to meet the new Greenhouse Gas 2014 (GHG 14) emissions regulations.

The goal of the new regulations are to reduce the total carbon dioxide output for the entire truck, not simply the diesel engine. This is accomplished simply by burning less fuel. For on-highway tractors, the GHG standards address aerodynamics, the rolling resistance of tires, vehicle weight, idle reduction, and engine efficiency. For vocational tractors, the regulations focus primarily on the rolling resistance of tires and engine efficiency. The new Detroit DD15® engine inside the aerodynamically advanced Cascadia Evolution is the perfect example of employing fuel efficiency through out its design to meet GHG regulations.

Meeting GHG 14 regulations isn't all that’s on the docket. There's also On Board Diagnostics (OBD 13), which requires diagnostics to detect, monitor and inform of component and system faults related to the emissions control system. The OBD system records failure codes and event data to help technicians diagnose and repair faults. All Detroit engines include updates to meet OBD 2013 requirements.